The computation of repeated game equilibria requires that the minimum equilibrium payoffs are known. These payoffs provide the credible threats, i.e., the values that the players receive if they deviate from the equilibrium strategies. In many games, the minimum payoffs are easy to find but they can be complicated in some games. Berg "Extremal pure strategies and monotonicity in repeated games" proposes a simple modification of Berg and Kitti (2013) algorithm to find the minimum payoffs and constructs a game where a path is no longer equilibrium when the players become more patient. This is a big result as intuition tells that the set of equilibria should be monotone in the players' discount factors. This finding relies on the fact that the punishment payoffs may increase when the players become more patient. This means that the threats may get weaker and this may change the players' incentives. The intuitive result is, however, obtained since it is proven that the set of equilibria is monotone if the punishment payoffs do not increase, which gives a sufficient condition for the monotonicity.

One of the most interesting applications of repeated games are oligopoly models. The following duopoly game was introduced in Abreu (1988). Two firms decide their output levels: low (L), medium (M) and high (H). The nine action profiles are denoted by the alphabets a-i and the Nash equilibrium is e giving payoffs 7,7. 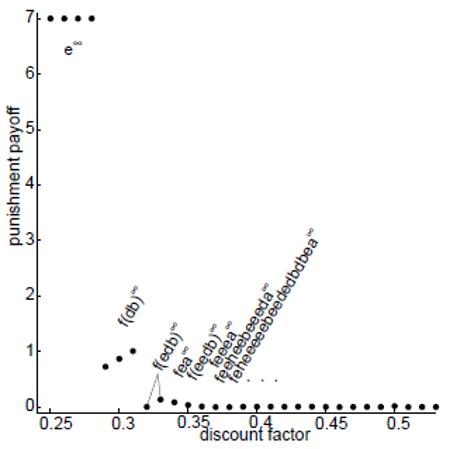 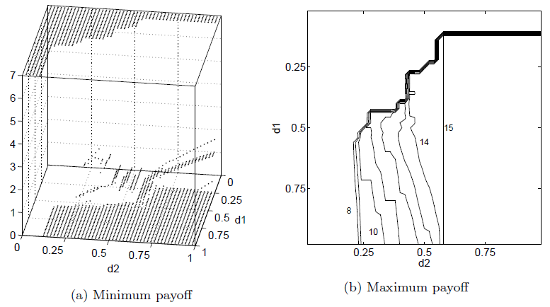