The usage of mobile Internet has grown dramatically in the past few years and the mobile operators are searching for cost-effective ways of providing service to the users. The problem is not only technological (how to send data more effectively) but also political. Mobile Internet requires spectrum and the problem can be seen as a resource allocation problem. How much spectrum is allocated to radars, television and telecommunications? These issues are also global since electromagnetic waves do not typically obey country borders but cause interference in the neighboring countries. It is also nice property that the devices work when you travel, so spectrum usage should be agreed with all countries and not only between few countries.

Spectrum licenses are traditionally given for many years (5-20 years) to guarantee the firms secure environment to do business, but mobile Internet usage is growing faster than the traditional licensing can offer new spectrum bands. A new paradigm called Cognitive Radio was suggested by Mitola (1998), where spectrum could be allocated dynamically based on the actual usage. The idea was to enhance spectrum usage by allowing devices to detect unused bands and reuse them if the usage does not harm the other spectrum users. This has created a technical problem of designing technology that guarantees that no harm is actually done. It is possible that the detection is not perfect and a device enters a band that is already used (at the same location, at the same time, at the same frequency band). In Berg et al (2011) we evaluate how cognitive radio may affect the markets of devices, network and services with an oligopoly model.

In Berg et al. (2012,2013) we describe different spectrum access models that give a taxonomy of the alternatives that the regulators have. For example, "licensed use" allows only one technology and one service to use a certain frequency band. "Unlicensed use" allows multiple technologies and services to occupy the same band (for example WIFI, microwaves and wireless toy cars share the same 2.4GHz band). There are also many more types of usage, like shared licenses where each license owner has a right to use the band under certain rules. This may offer better protection against harmful interference compared to the unlicensed use. But the what are the best spectrum access models for the bands?

We suggest that the problem can be seen as a mechanism design problem or an optimization problem where the country or its regulator may decided which types of usage is set for each band, how big bands are being offered and how long licenses are being offered. It is also possible that the regulator does not decide which type of usage is best for each band, but the firms could decide this through the auction mechanism. The firms could bid on different primary and secondary licenses (these licenses give authorization to use certain band if the primary user is not using the band), but the regulator has to evaluate the benefits of leaving certain band for unlicensed use since no bids in the auction represent the value of unlicensed use.

In Berg and Katsigiannis (2012) we examine a game between operators in mobile offloading. We find the operators' optimal strategies, which type of network to build, as a function of the expected demands. This type of analysis helps the operators to decide their long-term investments in capacity and preparing for future Internet demands. 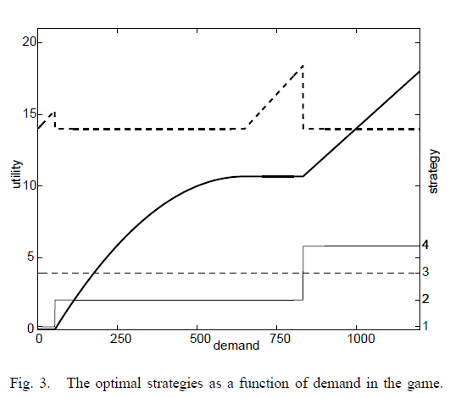 In Künsemöller et al. "A game-theoretic evaluation of an ISP business model in caching" we analyze a game between Internet Service Providers (ISP), Content Providers (CP) and Cloud storage providers. We examine what is the best way to cache and deliver content in Internet and what are the parties incentives to take part in caching.